Roosters are generally bigger with more colorful plumage than hens, but that is not always the case. You will know that you have a rooster when the rooster crows, and by the larger comb and wattle he sports. (By the way, roosters will crow all day long, not just at sunrise. Take this into consideration for your neighbors’ sake if you are going to attempt to breed chickens.)

When a rooster is ready to mate (and they are essentially ready to mate three or four months after they have lost their fluffy chick plumes!), the rooster does posturing and dancing. Part of the posturing is strutting.

He will lift his chest, neck and head high and begin to slowly strut near your hens. Not only is this posture supposed to impress the hens, but it is also supposed to alert them to the fact that the rooster is looking for a good time and about to pick a mate.

Next, the rooster will choose a hen. He will turn sideways so that his chosen hen will see how magnificent he is and get her “in the mood.” If the hen acquiesces willingly, she will then crouch low to the ground to wait for the rooster’s next actions.

There are “brute” roosters in chicken coops too. These roosters will take a hen by extreme force (i.e., the chicken equivalent of rape and assault!). In this instance, the rooster does not care about showing the hen anything.

He selects a hen, brutally pounces on her with his sharp talons, grabs her head, comb, and neck in his sharp beak, and has his way with the hen. It is a good idea to watch what kind of mating behavior your rooster has because the violent roosters can and will kill hens that try to refuse the rooster’s “advances.” 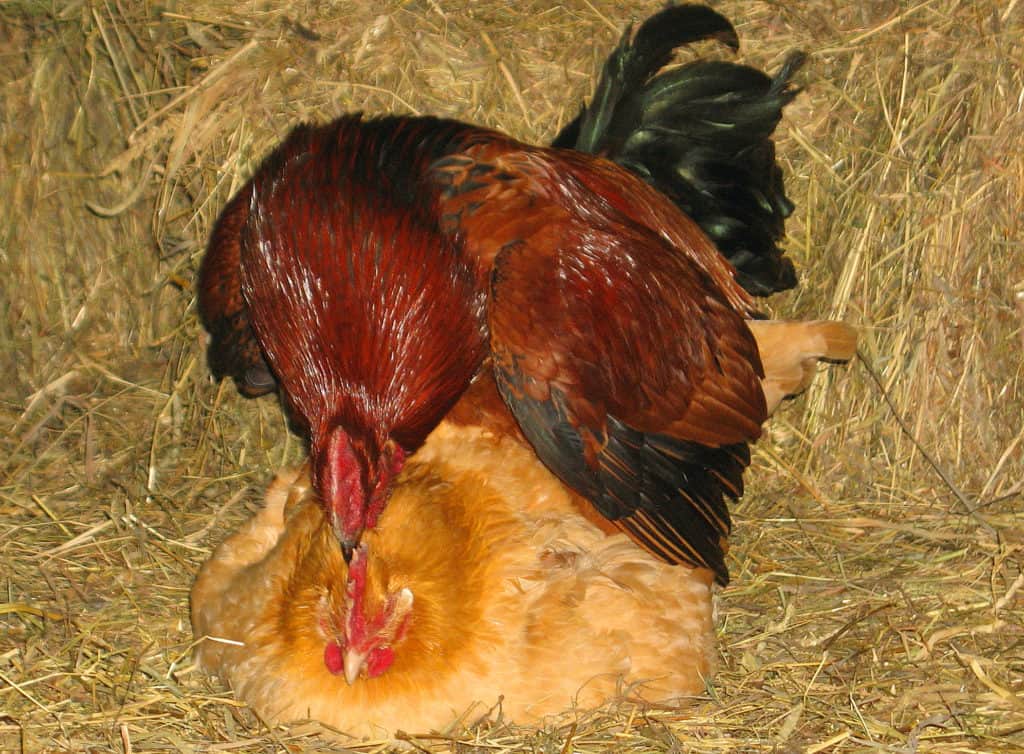 How Do Chickens Mate?

Chickens are birds, which means that fertilization occurs inside the female’s body before she lays the eggs. Many animals have a life cycle that begins with eggs, including humans. However, in the animal world, fertilization of eggs often occurs outside of the body, as is the case with fish or insects. This is not the case with most birds.

To make fertilization occur, birds have cloacas. This is a set of organs that includes their bladders, their reproductive organs, and their anuses. Essentially, there is one entrance and exit hole through which birds and chickens urinate, defecate and reproduce.

He rapidly shakes his behind for a few seconds to transmit the sperm to fertilize the eggs that are currently developing inside the hen’s ovaries.

Roosters will mate with intense frequency to ensure that their lineage lives on. Roosters can, and will, mate multiple times an hour, sometimes with the same hen, and sometimes with any willing hen in the coop.

Because only a small amount of sperm is transmitted at a time, and because most hens are only going to lay one egg at a time, this frequent mating is necessary to fertilize enough eggs to fill a nest.

The success rate of a rooster depends on a couple of factors. One, the age of the rooster is important. While a very old rooster can still mate, his ability to transmit sperm may be on the decline.

Additionally, an older rooster may not be able to grab and hold on to a hen during mating long enough to do the job correctly. Older roosters are also only able to manage mating with less than a dozen hens.

Two, the behavior of a rooster may terrify your hens such that they will do anything to get away from a savage rooster, and thus, mating may fail. Be sure to find a well-behaved rooster if you want several nests of chicks.

You should also know that hens will lay eggs with or without insemination, so you will have to be careful about taking eggs out of the hen house for food if you have a rooster walking about. 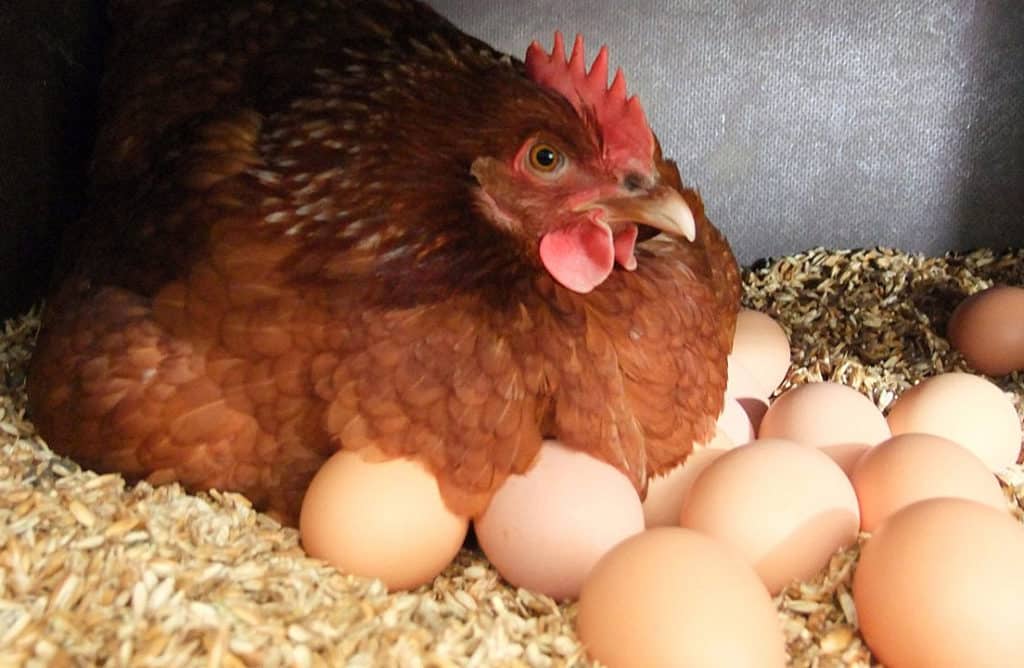 Hens are essentially ready to mate when the rooster has wooed them. There is really nothing they need to do to physically prepare for the fertilization process because they are constantly producing eggs. If there wasn’t a rooster around, the hens would lay eggs anyway, but the eggs would never hatch into chicks.

The eggs that are unfertilized in the absence of a rooster become your breakfast. Most hens are fertile all of their lives. It is only when a hen is much older that she may slow down or stop producing as many eggs.

She could still mate and produce fertilized eggs and chicks, but typically not as many as she did when she was a younger hen. Really old hens stop producing eggs at all, and that is when they typically become Sunday dinner.

More Than One Rooster: Good or Bad Idea?

Roosters are territorial and they will round up their “harems” of hens so that other roosters cannot steal them. They will have major cockfights in the coop to gain dominance, too, with the winner getting total freedom and breeding rights. The loser, if that rooster survives the fight, should be removed for his own safety, and/or to avoid another fight he may not survive.

If you want to keep more than one rooster to have a better variety of good chicken genetics, consider swapping roosters out every couple of weeks. Another suggestion is to keep some hens in one coop with one rooster, and some hens in another coop with another rooster. Swap roosters when you want to mix up the breeding and mating a bit.

Buying a Mating Pair vs. Raising a Pair From Chicks 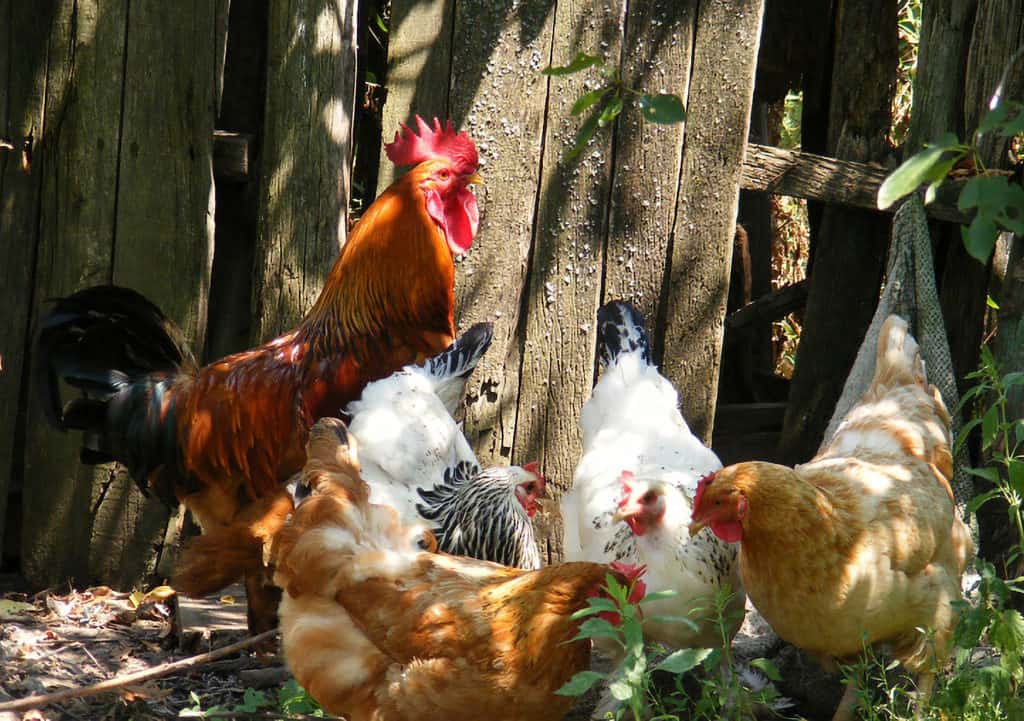 There are some pros and cons to buying an adult pair of chickens that are already well established with each other and will mate successfully versus buying a male and female chick you raise.

A mating pair is already ready to help you build a flock of chickens in your backyard chicken coop. You know that every nest of eggs will probably come from this breeding pair, but you will have to remove any male chicks from the chicken coop before the male chicks are ready to breed.

Chickens are not really susceptible to genetic deformations as a result of inbreeding, but you may want to avoid it all the same. If you are going to line-breed, watch for any abnormalities in chicks.

These abnormalities may be present as a result of a genetic defect in the line, and you will want to carefully breed your chickens to remove this defect in the line going forward. Ergo, considering purchasing a couple of different adult hens if you are going to start your flock with a breeding pair.

On the other hand, raising a mating pair of chicks, particularly if they are different subtypes of chickens and therefore not likely to be brother and sister, can work for you too. As the chicks grow, you can see the temperament in these chicks.

That is important to finding out if you have a good rooster or a violent rooster, which you would not know until the male chick(s) is/are fully grown. If you have an unpleasant rooster who behaves violently, you will not want to mate such characteristics into your chicks. Buying another rooster full-grown can help with that.

It isn’t difficult to mate chickens. They already know how purely by instinct. The problems arise when you either have violent roosters, too many roosters, or roosters and hens that are too old. Chickens will mate at the drop of a hat, and you can often catch them in the act.

One Reply to “How Do Chickens Mate?”