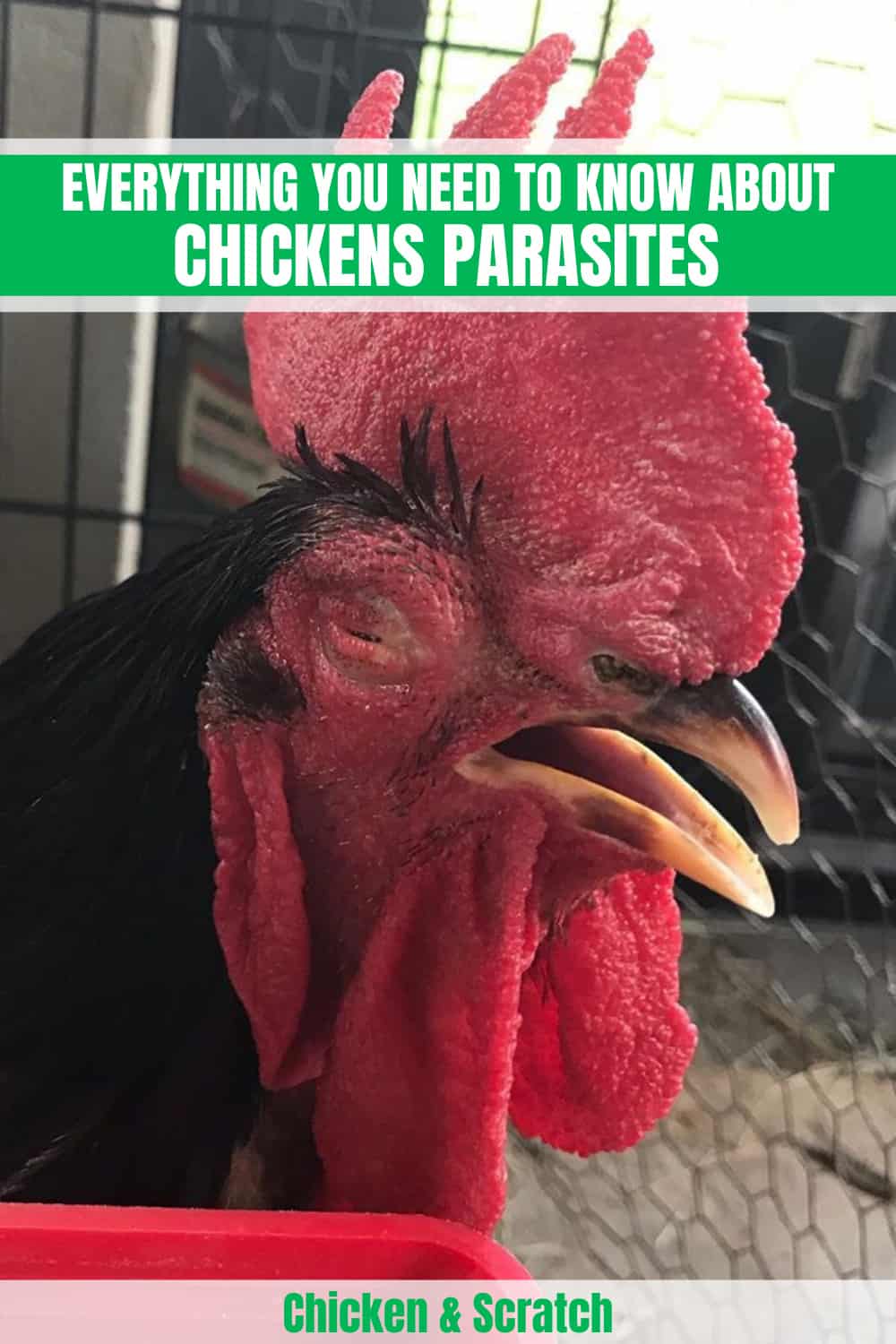 Chickens are prone to becoming hosts to a range of internal and external parasites that can lead to many different problems, such as illness, developmental problems, and even death. Knowing what parasites to look for in your chickens and what the evidence of those parasites typically is can help you prepare for and prevent an infestation before it becomes too destructive.

External parasites are tiny creatures, often insects, that live outside of the chicken’s body and whose bites or burrowing can lead to inflammation, infection, and disease.

Symptoms of most external parasites are feather loss and possibly bleeding from over-preening and pecking. Internal parasites live inside the bird’s bloodstream or organs and can spread disease and cause destruction from within.

Symptoms of internal parasites include changes in eating, sleeping, bathroom, or laying habits, as well as physical signs of infections such as inflammation. For all kinds of parasites, the best means of preventing infestations is to keep the coop and run clean at all times and to let your birds take regular dust baths (a mix of half wood ash and half peat moss works well).

The most common external parasites in chickens are lice, including head lice, body lice, shaft lice, and wing lice. They live for only three weeks, but in that time they can lay up to 300 eggs.

Chickens typically pick up lice through contact with wild animals or birds, from contaminated clothing or equipment, or from new birds being added to the flock. Chickens infected by lice should be treated with poultry dust, particularly around the wings, saddle feathers, and tail. Dusting should be repeated every 14 days until the lice are gone.

Chicken fleas spread quickly, with infestations often developing during the warmer months. If one bird has fleas, it is likely elsewhere in the flock as well. European chick fleas are found across most of the U.S.; Western chick fleas are found in Canada and the northwest of the U.S. The fleas are brown and large enough to be seen in the bird’s feathers or, sometimes, its droppings. One variety, stick tight fleas, appear in masses around the eyes, combs, and wattles. 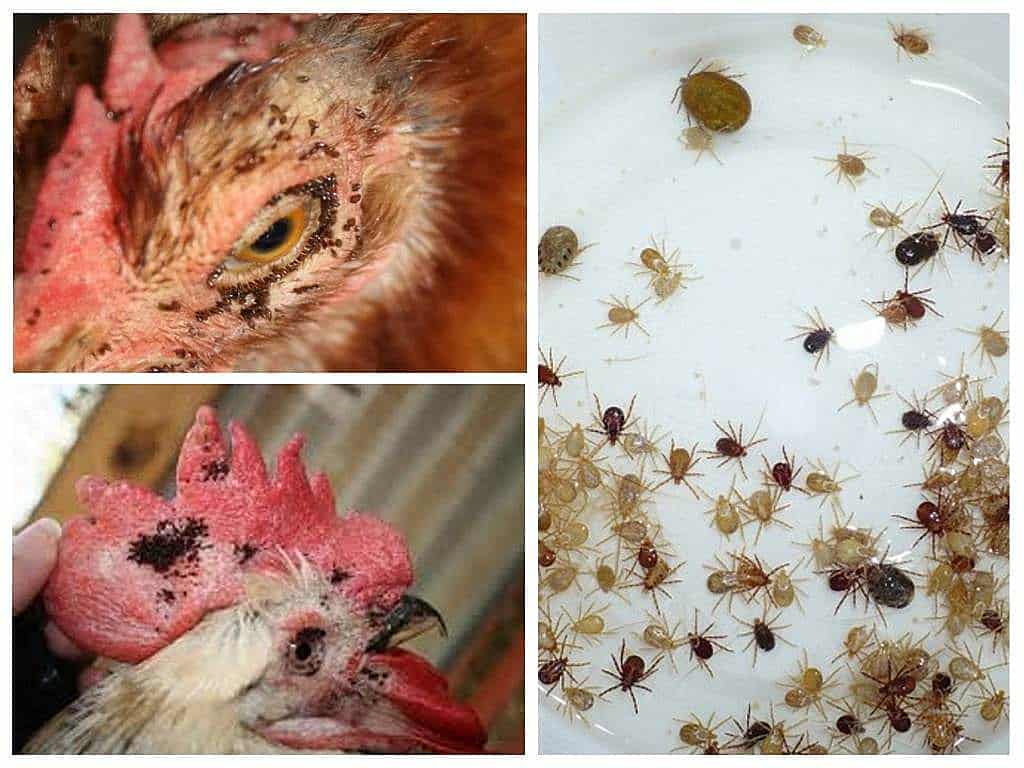 these need to be removed by tweezers and the affected area coated with petroleum jelly. Chickens infected by fleas should be treated with poultry dust, particularly around the wings, saddle feathers, and tail.

Fowl ticks are small blue parasites that are typically only found in warmer climates. Their bite releases a neurotoxin into the bird’s blood that disrupts its sleep patterns and can carry diseases that could lead to paralysis or even death.

If fowl ticks are found and removed from a bird but it still shows signs of being sick, the bird should be seen a veterinarian. Ticks should be removed with tweezers and the birds treated with poultry dust.

The same biting insects that bother humans also bite chickens. This includes black flies, gnats, and mosquitos, which can spread avian pox. The population of these biting insects can be reduced by removing stagnant water near the coop or using a pesticide; do not apply the pesticide where chickens might consume it.

Botflies lay their eggs on the chicken’s skin. When they hatch out, the larva burrow into the flesh to grow. Once they are fully mature, they burrow back out of the flesh. Prevention is the best measure with botflies: keep the coop cleaned regularly and check for signs of infection.

Blowflies infest birds when their maggots burrow into the flesh—a process known as myiasis—and can introduce tapeworms into the bird. Chickens with myiasis should twice a day be bathed in warm water and the infection cleaned with hydrogen peroxide and then warm saline to flush out the maggots, which can then be pulled out with tweezers.

Apply Vetericyn spray to the damaged area. After two days, stop use of the hydrogen peroxide but continue the warm bath, saline, and physical removal of maggots.

These arachnids are often quite small and hard to see. Their bites drain blood, resulting in anemia, which often can be identified by the wattle, comb, and skin around the eyes turning pale.

The easiest mite to see is the Northern fowl mite, which typically strikes in the winter and leaves bits of waste around the base of feathers. To remove these mites, dust the birds and coop with wood ash or poultry dust. 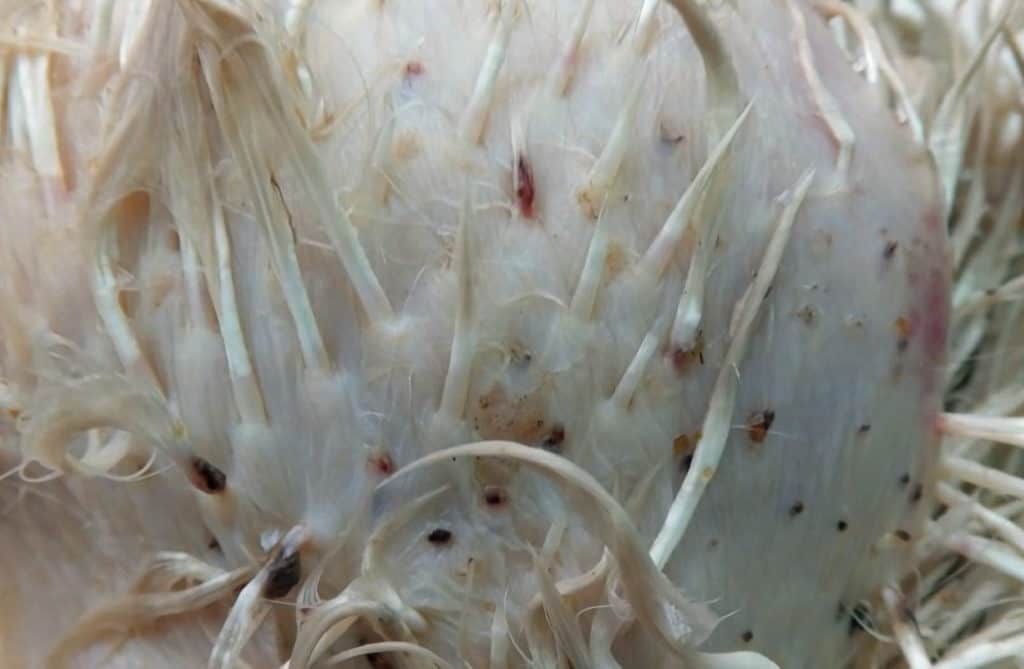 Scaly leg mites eat the flesh under the bird’s leg scales, leading to lameness and possibly death. To remove them, soak the legs in warm water and brush off the loose skin, dry them, rub them with a toothbrush that has olive oil on it, and then cover the legs with petroleum jelly to suffocate the mites. Repeat this process three times a week until all evidence of the parasite has disappeared.

Red mites are the hardest to remove; they hibernate through the winter and strike from the spring through fall, usually at night. The only way to effectively mitigate Red mites is to remove your flock to a different coop temporarily—6 to 7 weeks is usually enough time—and to completely clean out and treat the original coop.

After mitigating any kind of mite infestation, increase the protein and iron content of your flock’s regular food for several days in order to help the birds recover. If you are wanting something more specific, you can read our article: Chicken Mites and Lice: How to Get Rid in 3 Weeks.

Chickens can become infested with worms by eating droppings or other material that has been infected by the eggs or by eating creatures that have been infected with the worms.

To reduce the likelihood of your flock contracting worms, keep the yard and runs free of mud, keep the coop fresh and dry, muck frequently, keep the grass short (sunlight can kill worm eggs), keep wild animals out of the run and coop, give your flock plenty of space, and quarantine sick birds immediately.

The most common worms in chickens are roundworms, which can permeate the bird’s body; they are most likely to invade hens younger than four months. Symptoms of roundworm infestation are diarrhea, loss of appetite, drop in egg production, dizziness, and isolation.

Capillary worms infest the chicken’s crop and esophagus, producing symptoms similar to the roundworm’s. Adding a deworming medicine, like Wazine, to the flock’s water can eliminate either parasite, but you cannot eat their eggs while they are taking the medication and too much use can actually build worms’ resistance to the treatment.

A chicken can contract tapeworms and eye worms by eating an intermediate host that is already infected. Tapeworms can lead to weight loss but rarely kill the host. Eye worm, which is common in warmer climates, results in red swelling and drainage around the eye, scratching at the eye, and eventually blindness. It can be treated by spraying the flock with VetRx.

Gape worms infect the chicken’s lungs and respiratory system. Symptoms include gaping of the mouth to inhale, head shaking, and hissing. If left untreated, gape worms will produce lethargy and weight loss in their host, and eventually death.

Wazine can be used to eliminate gape worms before they become too developed, but if the infestation becomes advanced, a veterinarian’s prescription for Fenbendazole will be needed. 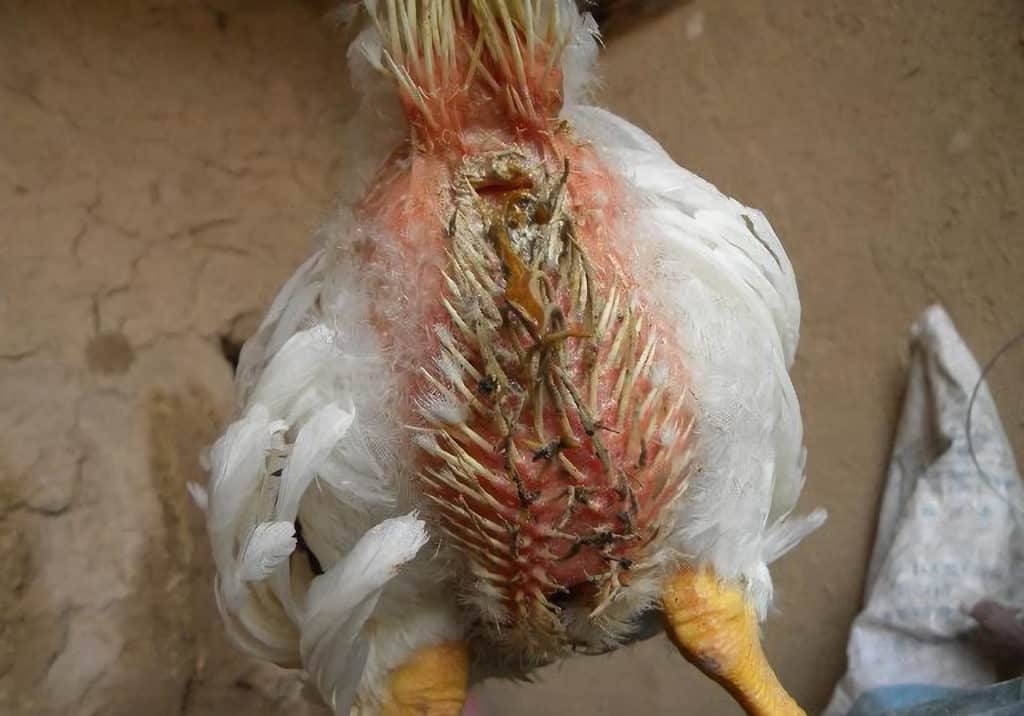 These microscopic, spore-forming protozoa live inside the cells of the chicken. Chicks and pullets are particularly susceptible to coccidiosis, which is one of the leading causes of death in chickens between three weeks and six weeks of age. Symptoms include lethargy, loss of feathers, and bloody diarrhea.

Vaccination against the disease is available, as is a medicated diet. To be safe, new chicks should always be kept separate from the flock for two to three months before being introduced into the population. Probiotics in the water supply may also help prevent the development of the parasite. Read more about Coccidiosis in Chickens.

The T. gondii parasite is carried by rodents, cockroaches, and biting flies. The disease caused by the parasite, toxoplasmosis, can cause diarrhea, trembling, weight loss, decreased egg production, and blindness.

Like most fowls, chickens are active foragers, which makes them vulnerable to a range of external and internal parasites. If these parasites infest a bird, they can produce a wide range of symptoms, including behavioral problems, illness, and even death.

While some treatment options exist for infected birds, preventative measures are the best course of action to keep your flock healthy and safe.