All cases where the pregnancy terminates early and the foetus is expelled are called abortions. Abortion may be defined as the loss of a foetus between day 42 and 271 of pregnancy, with foetal loss before this stage defined as early embryonic death (before day 14) and late embryonic death (between days 14 and 42). There are multiple potential causes of abortion and the detection of abortions in a herd can vary significantly depending on the husbandry system and calving pattern. Therefore, the reported incidence of abortion at herd level also varies markedly. It has been suggested that an abortion rate of 5% or more in a herd should be considered an indication of an abortion problem (Deas, 1981).

This page is a general overview – to read specific disease conditions click on the links below.

The causes of abortion have been classified by Boyd and Gray (1992) as follows: 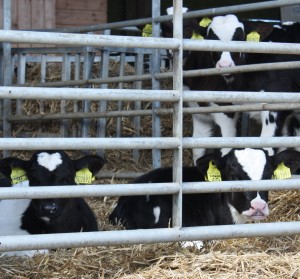 The most important infectious abortion agents are listed below. It is important to note that several of these are also zoonotic:

In the US, losses associated with Neospora caninum abortion have been estimated to be in excess of $500 million although losses to the beef industry were significantly less (Reichel et al., 2013). In the UK in 2012, of those abortions where a diagnosis was reached,  Neospora caninum contributes to approximately 12% of all diagnoses, Schmallenberg accounted for 10% (see image) but has decreased or even potentially disappeared since, Salmonella Dublin accounted for approximately 7% and Bacillus licheniformis approximately 15%. Abortion due to BVD was diagnosed in 7% of diagnosed submissions with the incidence of abortion due to Leptospirosis decreasing to around 1% of diagnosed submissions (VIDA, 2012).

Fungal abortions are typically associated with contaminated feed and are either sporadic or occur in small outbreaks, typically between the fifth and seventh months of pregnancy.

Chlamydial infection in cattle has been associated with reproductive disorders including abortion, endometritis, repeat breeding, vaginitis, seminal vesiculitis, weak calves and perinatal mortality. It has been suggested that both Cp. abortus and Cp. pecorum are ubiquitous in cattle (Kaltenboeck et al., 2005).

Abortions caused by trichomoniasis and brucellosis are extremely rare in the UK, and both diseases are subject to statutory disease control measures.

Control and Prevention of Abortion 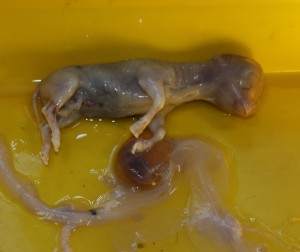 Abortion is expulsion of the foetus from day 42 to 271. The small foetus in the orange sack in the middle of the photo is about 42 days old. The larger one at the top of the image is about 70 days old.

Due to the multifactorial aetiology of abortions in cattle, general prevention of non-infectious abortion focuses on good husbandry, feeding and management. The control of infectious abortion is based on good disease control through closed herd policy, careful screening and quarantine of bought-in or introduced (e.g. rented bulls) animals and good biosecurity. Specific control measures for individual infectious abortive agents are presented under each disease.

Once a sporadic abortion or an outbreak of abortions has happened, it is, in most cases, difficult to prevent further abortions from occurring unless the causative agent is identified and can be eradicated. In some cases, like IBR, further abortions will occur months after the first event.

An important cornerstone of abortion control in a cattle herd is good record-keeping of abortion events, and identification, if possible, of the causes in each detected case of abortion. In the UK every abortion in cattle has to be reported to the Animal and Plant Health Agency (APHA), who then decide whether Brucellosis testing is carried out. It is good practice to investigate all abortions, even though less than 10% of all laboratory investigations of abortions produce a conclusive result (VIDA, 2012). Over a period of time, a picture of the herd’s health status will emerge, and can be used to refine the Herd Health Plan to control disease.

A systemic examination of all abortion cases should be carried out by a vet to collect information on the history of the individual cow and the herd, conduct an examination of the cow and the foetus (including placenta), collect laboratory samples and interpret results in connection with the cow and herd history. In some cases, samples will need to be taken as part of statutory disease control measures.

As it is virtually impossible to prevent an abortion from happening once the expulsion of a foetus has begun, the treatment should concentrate on making sure that the dam does not suffer any long-term effects from the event. Subsequent retained foetal membranes or metritis need to be attended to.

In the case of an unknown cause, further spread of a potential contagious infection should be prevented by isolating the affected cow/cows, until discharges have cleared and/or until advised by a veterinary surgeon.

The dam should be observed and treated if after-effects are seen. Affected animals should be isolated to prevent further spread.

To prevent abortions from happening or abortive agents from entering the herd, the following points should be included in the Herd Health Plan:

2 Replies to “Abortion General overview of abortion in cattle”