Joint-ill is a suppurative polyarthritis and occurs in lambs up to one month of age. Usually the route of infection is through the navel, tail or castration wounds, although the gut and upper respiratory tract are now thought to be significant routes of infection, which are invaded by pathogenic bacteria from a contaminated environment and travel via the bloodstream causing localised build-up of bacteria in the joints (Angus, 1991a).There is a sudden onset of lameness in young lambs, frequently followed by sudden death. Morbidity may be 2-15% between flocks, but up to 50% has been reported (Nicholas and Loria, 2014). Affected lambs are often lame in several limb joints including fetlocks, knees, hocks and stifles. Affected joints are hot and painful. The lambs are dull, feverish and clearly unthrifty. Some may have swollen, infected navels, while others may have symptoms of pneumonia or meningitis (Angus, 1991b; Green et al., 1995, 1997; Knowles et al., 1994).

The infection is usually caused by strains of Streptococci, particularly Streptococcus dysgalactiae.  S. dysgalactiae infections are usually acquired in the first few days after lambing. The umbilicus is proposed to be the most likely route of infection (Watkins and Sharp, 1998), and it is thought that the main source of infection is from the vaginal tract of colonised ewes (Rutherford et al., 2014). S. dysgalactiae has been shown to survive on straw at 37°C for 42 days (Rutherford et al., 2014).

Coliforms and occasionally Actinomyces pyogenes have also been isolated from joint-ill infections. If the exudate is non-suppurative, but turbid and fibrinous, Erysipelothrix rhusiopathiae may be isolated in cases of lambs 2-6 months of age, with a transient fever, but usually in the absence of recumbency and depression (Nicholas and Loria, 2014). Fusobacterium necrophorum may also cause necrotic joint lesions (Angus, 1991a). Mycoplasma species may also be a cause of joint problems (DaMassa and Porter, 1987).

The bacteria named above are also present in the following diseases/infections:

Control and Prevention of Joint-ill

It is essential to move lambs and pregnant ewes away from the contaminated area, which should be thoroughly cleaned and disinfected. Wherever possible, lambing pens should be moved to a different area. Care should be taken that all lambs get sufficient colostrum during the first six hours after birth and that their navels are dressed with a navel dip such as iodine (Angus, 1991a).

Your farm vet may recommend Erysipelothrix vaccination as an option if there is a particular disease risk. Two or three doses of the Erysipelothrix vaccine are given to the ewe, the last dose being given 3 weeks before lambing. Lambs can also be vaccinated from 6-8 weeks of age (Marchant, 1997).

Joint-ill is caused by bacteria, so treatment with high doses of antibiotics can be successful if the disease is diagnosed early. If there is an outbreak of joint-ill on your farm, you should consult your farm vet as the fate of the individual lambs depends on the stage of infection. Sometimes it may be better to cull the affected animals, especially when several joints are involved.

Until the joint-ill bacteria have been identified, it is best to assume that Streptococci are the cause, and treat the lambs with products containing penicillin initially. A simple penicillin product for daily administration is preferable to a long-acting form, and should be given for 10 days duration in combination with anti-inflammatory (Marchant, 1997). Penicillin would also be used if Erysipelothrix were present.

The use of intra-articular corticosteroids is not recommended, but there may be a place for non-steroidal anti-inflammatory agents.

Joint-ill is a major welfare problem in lambs and is often cited as being caused by poor hygiene practices. Farmers need to ensure their lambing pens are clean, lambs have suckled colostrum and the navels are dressed with an antiseptic to keep the lambs free of the disease. Severely affected animals should be humanely destroyed.

Farms that have a problem with joint-ill during lambing time should have their lambing management reviewed and improved as part of the overall Flock Health Plan. Animal health advisers and your farm vet can both help with this. 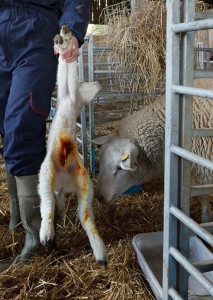 All newborn lambs should have their navels dipped with antiseptic to avoid infection. (Image courtesy of Cornwall College, photograph by Steve Tanner 2012).

3 Replies to “Joint-ill is a bacterial infection”