Fungi and yeasts may affect poultry by direct infection or via infection of feedstuffs, which may also alter the nutritional composition of the feeds. Direct infection of birds is normally associated with the respiratory tract, with nervous system and eye problems the sequelae of the condition.

Apergillosis is by far the most common mycosis of birds and is an economically important respiratory disease in poultry (Charlton et al., 2013). Losses are incurred through bird mortality and carcass condemnation. Other fungi and yeasts associated conditions include dactylariosis and candidiasis.

Respiratory aspergillosis is not commonly found in modern, clean commercial poultry systems. Infection is by the inhalation of spores, normally associated with litter, bedding and feed. Infection can also originate from infected eggs hatching during incubation and releasing a large number of spores, thus infecting other chicks (Pattison et al, 2008). Infection, particularly in young birds often results in brooder pneumonia (see box below). Although aspergillosis is predominantly a disease of the respiratory tract, other organs can be infected (Beernaert et al., 2010). Systemic infection usually to the brain or eyes, sometimes occurs (Wallace, 1976). Clinical signs are often, non-specific and dependent on the organ involved (Charlton et al., 2013).

The incidence and severity of disease is increased in warm and wet/humid environments, as well as in dusty conditions and in situations resulting in high levels of ammonia production. Contaminated poultry bedding is often the source of infection.

Newly hatched chicks are most susceptible to aspergillosis, which manifests as brooder pneumonia. Although older birds may be constantly exposed, an acquired immunity means that new infections rarely develop unless individuals receive excessive exposure. Stress resulting in immunosuppression may also be a factor in adult infections.

In decreasing order of incidence, spores produced by A. fumigatus, A. flavus, A. niger, A. glaucus and A. terreus are infective to poultry. Aspergillus spores are widely distributed in the environment, found in soil, grains and decaying plant matter and mycosis arises from inhalation of these spores from sources such as equipment, air ducts, contaminated feeds and poultry litter. Wet litter may produce large quantities of spores that are released as litter dries out. The optimum temperature for growth of A. fumigas is 40°C, however few environments impede growth, as it is reported to occur at 9°C and 55°C at a range of 11-96% relative humidity (Charlton et al., 2013).

Brooder pneumoniaAspergillosis is often deemed synonymous with ‘Brooder pneumonia’; however, aspergillosis is just one cause of Brooder pneumonia, which can also be bacterial in origin, with chicks inhaling infected dust in the hatcher. Bacterial strains involved include, Escherichia coli, Staphylococci, Enterococci and other faecal strains. Pseudomonas is one of the most common bacterial causes, and is also often implicated in outbreaks of omphalitis (also known as navel ill, which is characterised by infected yolk sacs and unhealed navels). The difference is marked during post-mortem, with bacterial pneumonia cases presenting red and purple bloodstained tissue, and with aspergillosis recognisable by the presence of white or  yellow spots or lesions.

Due to increased knowledge around mouldy bedding and feeds, and subsequent improved management, aspergillosis is now relatively uncommon and cases of brooder pneumonia are more likely to arise as a result of a bacterial infection. Long transport times, with poor ventilation when chicks are delivered can exacerbate the condition and antibiotic treatments are necessary for bacterial cases in order to reduce losses and the frequency of any subsequent conditions, such as joint ill. (D. Shingleton, Personal Communication). Please consult your veterinarian for any further advice. 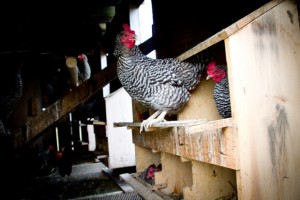 In acute aspergillosis difficult and open-mouthed breathing of hatchery infected chicks can be observed within the first five days. These “gaspers” suffer from obstruction of the respiratory airways. Similar symptoms can  be confused with infectious bronchitis and infectious laryngotracheitis, although these are accompanied by gurgling and rattling noises and there is usually no noise associated with aspergillosis. At post-mortem, gross lesions are observed, particularly in the lungs.

Chronic infection may result in failing respiratory function, blindness, neurological dysfunction or duodenal dropsy. In adults especially, an occasional bird may become affected whilst the remainder of the flock remains apparently healthy. These individual cases arise because of a lowered immunity, or as a consequence of a severe exposure. Immunity can be impaired by factors such as administration of tetracyclines, vaccinations, metabolic disease, inadequate nutrition, overcrowding, starvation, toxicosis, thermal discomfort and traumatic injuries.

The pathological symptoms of an outbreak of aspergillosis in 6.5 week old pullets are described by Barton et al., (1992). Other than a sudden increase in mortality to 0.5% per day, there was no evidence of disease in the flock.

Control and Prevention of Aspergillosis

Since there is no effective treatment licensed for use in birds intended for meat, control depends entirely on good management to reduce exposure and other risk factors such as those highlighted in the box on the right.

The following control and prevention measures include:

There is no effective treatment for this condition.